Mumbai, August 03, 2022: Pharma major Lupin Limited [BSE: 500257 | NSE: LUPIN] reported its financial performance for the quarter ending June 30, 2022. These unaudited results were taken on record by the Board of Directors at a meeting held today.

Commenting on the results, Mr. Nilesh Gupta, Managing Director, Lupin Limited said, “Our numbers are muted this quarter, but we expect a strong bounce back Q2 onwards. Our U.S. sales took a significant dip as we took several strategic decisions to pave the way for building a sustainable and profitable business. During the quarter we pared down inventories and we took shelf stock adjustments on select products. While we continue to see price erosion in our US business and inflation in input materials, our India business continues to do well growing ahead of the market. All other geographies continue to perform well, and we have now implemented several optimization measures including addressing our workforce in operations and supporting functions to improve our cost position and ensure competitiveness. While the benefits of this optimization will start accruing Q2 onwards, we are now focused on getting back on the growth path driven by growth in key markets like India and multiple important complex generic launches in the US and other developed markets. On the compliance front, we have now satisfactorily addressed both Goa and Somerset, and continue our efforts to be best in class in quality and compliance across our network.” 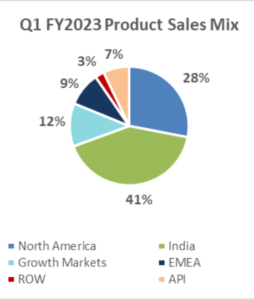 Lupin continues to be the 3rd largest pharmaceutical player in both U.S. generic market and U.S.
total market by prescriptions (IQVIA MAT June 2022). Lupin is the leader in 44 of its marketed generics in the
U.S. and amongst the Top 3 in 113 of its marketed products (IQVIA MAT March 2022).

Lupin received approval for 4 ANDAs from the U.S. FDA in the quarter. Cumulative ANDA filings with the U.S. FDA stand at 459 as of June 30, 2022, with the company having received 301 approvals to date.

The Company now has 54 First-to-File (FTF) filings including 21 exclusive FTF opportunities. Cumulative U.S. DMF filings stand at 173 as of June 30, 2022.

Lupin is an innovation-led transnational pharmaceutical company headquartered in Mumbai, India. The Company develops and commercializes a wide range of branded and generic formulations, biotechnology products, and APIs in over 100 markets in the U.S., India, South Africa, and across the Asia Pacific (APAC), Latin America (LATAM), Europe, and Middle East regions.

The Company enjoys a leadership position in the cardiovascular, anti-diabetic, and respiratory segments and has
a significant presence in the anti-infective, gastro-intestinal (GI), central nervous system (CNS), and women’s
health areas. Lupin is the third-largest pharmaceutical company in the U.S. by prescriptions. The company
invested 8.7% of its revenue in research and development in FY22.

Lupin has 15 manufacturing sites, 7 research centers, more than 20,000 professionals working globally, and has
been consistently recognized as a ‘Great Place to Work’ in the Biotechnology & Pharmaceuticals sector.

Hit enter to search or ESC to close

XWe use cookies on our website to give you the most relevant experience by remembering your preferences and repeat visits. By clicking “Accept”, you consent to the use of ALL the cookies. However you may visit Cookie Settings to provide a controlled consent. Read MoreCookie settingsREJECTACCEPT
Manage consent

This website uses cookies to improve your experience while you navigate through the website. Out of these, the cookies that are categorized as necessary are stored on your browser as they are essential for the working of basic functionalities of the website. We also use third-party cookies that help us analyze and understand how you use this website. These cookies will be stored in your browser only with your consent. You also have the option to opt-out of these cookies. But opting out of some of these cookies may affect your browsing experience.
Necessary Always Enabled

Performance cookies are used to understand and analyze the key performance indexes of the website which helps in delivering a better user experience for the visitors.

Analytical cookies are used to understand how visitors interact with the website. These cookies help provide information on metrics the number of visitors, bounce rate, traffic source, etc.

Advertisement cookies are used to provide visitors with relevant ads and marketing campaigns. These cookies track visitors across websites and collect information to provide customized ads.

Other uncategorized cookies are those that are being analyzed and have not been classified into a category as yet.